Students need to learn the purposes and methods of narration in order to understand the narrative framework and to eliminate frustration when they read. When students know the narrative elements, they can more easily follow the story line and make successful predictions about what is to occur. In addition, understanding these elements develops higher-level thinking skills.

Narrative text includes any type of writing that relates a series of events and includes both fiction (novels, short stories, poems) and nonfiction (memoirs, biographies, news stories). Both forms tell stories that use imaginative language and express emotion, often through the use of imagery, metaphors, and symbols. Students need to know how narrative texts work and how to read them, because stories are used for many important purposes. The purpose of narrative text is to entertain, to gain and hold a reader’s interest; however, writers of memoirs and novels often relate complex stories that examine universal ideas, events, and issues. In addition, speakers, advertisers, and politicians use stories to persuade us to accept or reject an idea.

In effect, students need to learn the purposes and methods of narration in order to understand the narrative framework and to eliminate frustration when they read. When students know the narrative elements, they can more easily follow the story line and make successful predictions about what is to occur. In addition, understanding these elements develops higher-level thinking skills. For example, the complications in a plot are related to cause and effect, and awareness of character’s motives can lead to analysis.

All in all, the narrative form is unique, because authors relate ideas they want to express about how people behave and what they believe. These ideas, or themes, generally relate to universal truths and make connections to the reader’s experiences.

Teachers can use the following techniques to introduce the narrative form.

Ask students to do pre-writing about a theme.

Examples: List four of your fears; be ready to discuss one. Write about a time you experienced fear.

Ask small groups to make posters related to a theme or themes.

Example: Students can define a theme, identify positive and negative examples, create a symbol, and write a one-sentence assertion about the theme.

Ask students to identify modern values and record their answers.

Have the class identify the values that are evident in the narrative.

In small groups, have students determine how the characters’ values cause conflict.

Create a series of questions, each starting with the word suppose, that relate to a character’s conflicts and complications.

Example: Suppose you were not allowed to see the one you loved?

Ask students to copy lines from the narrative that relate to the conflict or characters; break the lines into three parts, and write each part on a different color index card. Mix the cards together, and then ask students to work together to find complete lines. Then have them read the line aloud and make a prediction. Example:

Line 3: “and I’m pretty cynical about everything.” (The Great Gatsby)

Ask students to make predictions about the title and/or illustrations in the text. Example: What does the title, A Separate Peace, suggest?

Utilize the AWAIT strategy. To teach the methods of indirect characterization, have each student create an image of a character. Each image should include the following details:

Words: Create a line of dialogue that the character would say.

Actions: Make the character do something (e.g., run, hit a ball).

Interactions with other characters: Write a sentence that creates a conflict between the character and someone else.

Thoughts: Create a thought bubble; record the character’s thoughts in the bubble. In addition, have each student write a one-line assertion stating what the character is like. Students can easily remember indirect characterization by learning the acronym AWAIT.

Use the graphic organizer in the figure below to teach the functions of the setting. Ask students to create an example for each function.

The function of setting 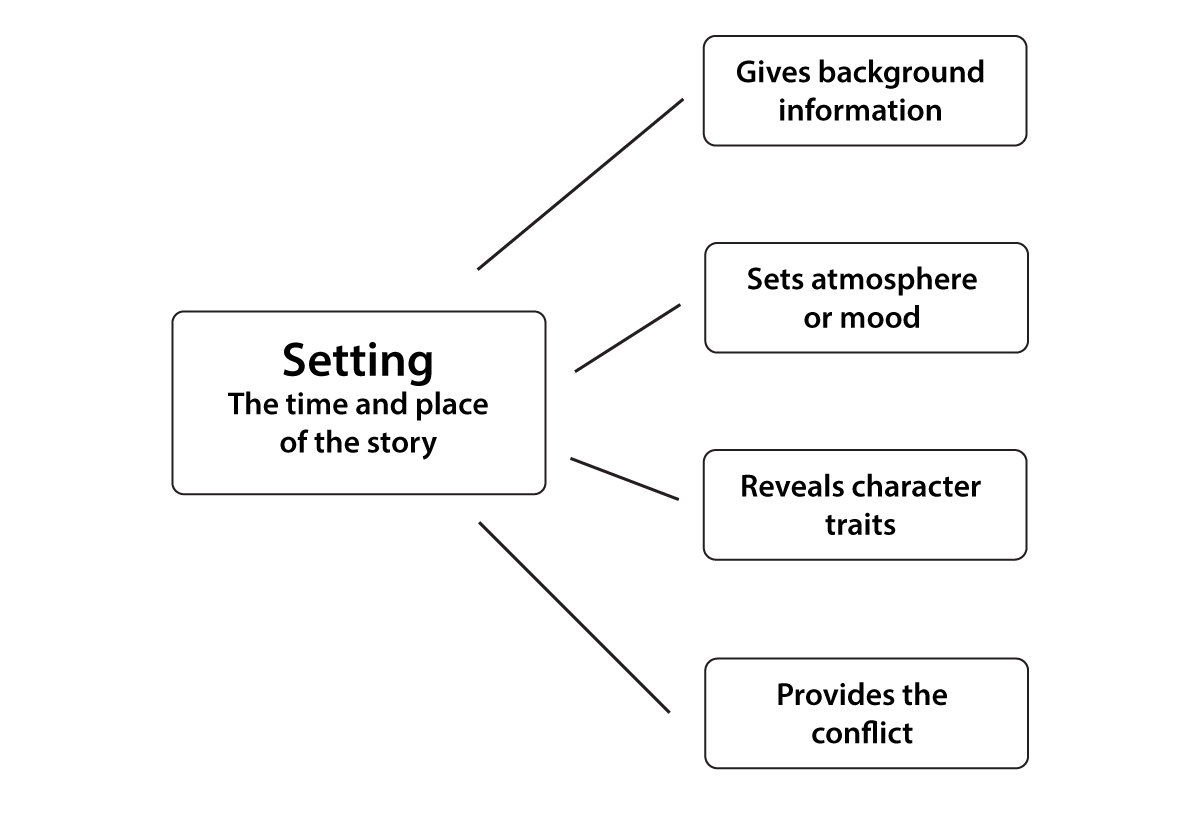